During the MDR Colloquium MDR researchers will share their latest findings and outcomes to the rest of the consortium and ISAB members. Every month one junior and one senior researcher will take the floor to show their work and get feedback.

You can join the meeting via the Outlook invitation you received.

During this colloquium we will host 2 MDR researchers: 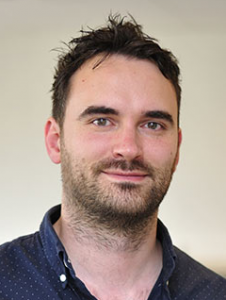 Steven Vermeulen obtained a MSc degree in Biochemical Engineering at the University of Antwerp in 2010, after which he started to work at the molecular genetics department of the VIB in Antwerp. In the research lab of Prof. Christine van Broeckhoven, Steven assisted in finding novel mutations associated with Alzheimer’s disease and elucidating their phenotypic consequences. In 2016, Steven embarked on a new adventure in the form of a PhD project at the MERLN institute. Under the supervision of Prof. Jan de Boer, Steven worked at the interface of biology, bio-informatics, and material science and elucidated the mechanobiological implications of micro-topographical surface structures. After obtaining his PhD in 2020, Steven started a Postdoc position in the Instructive Biomaterial Engineering (IBE) group to study the application areas of spheroid calcification under the supervision of Prof. Pamela Habibović.

Tina Vermonden obtained her Ph.D. degree in 2005 in Organic Chemistry at Wageningen University. In the same year, she joined the Department of Pharmaceutics at Utrecht University working on hydrogels as scaffolds for tissue engineering. During an exchange project, she worked on the diffusion of macromolecules in hydrogels at the Department of Pharmaceutics at the University of Minnesota (Minneapolis, USA) in the group of prof. R.A. Siegel in 2008.

In 2020, she was appointed as full professor at the Department of Pharmaceutics in Utrecht and her research focusses on biomaterials for drug delivery and regenerative medicine. In 2014, she was awarded the VIDI-grant and Aspasia-grant of Dutch Research Council (NWO) for research on hydrogels that release drug-loaded micelles. In 2021, she obtained a VICI-grant for research on shrinking printing for kidney engineering. Since 2022, she acts as associate editor for the ACS journal Biomacromolecules.

Please find here the invitation for the MDR Colloquium of October. 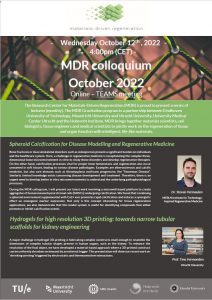